“Let me hear in the morning of your steadfast love, for in you I trust. Make me know the way I should go, for to you I lift up my soul.” Psalm 143:8

One of the first lessons I learned concerned the vital importance of facing loss head on. There is a temptation to sidestep the pain. Some mourners decide to remove reminders of the person they lost. It seems to them that there might be an easier way. Take a detour and avoid immediate pain.

However, from my experiences on the day of Kim’s death—seeing her before the funeral home took her, then sleeping in my own bed, and taking a shower the next morning where she died—I had learned the importance of facing painful realities squarely. Head on. Facing loss.

“Everyone has grief, but mourning is a choice.” H. Norman Wright

Within the first couple of weeks, I had some imagery to go with my conviction. I felt as though there were doorways erected all around me. Some were big doors, and some were small doors. Some stood there, and some appeared in front of me at inopportune times. The doors were representative of something difficult and painful.

A few examples might help. One door was choosing a casket. Another was planning the funeral. Then there were Kim’s pictures all around my house that reminded me of my loss. Daily reminders. Moment-by-moment reminders. One day, I saw one of her baby pictures next to a picture of her holding one of our grandchildren. It crushed me. Each experience a doorway that must be confronted. I could turn away or I could press in and open the door.

I had been warned of another step and it was, indeed, a difficult doorway. It was a massive doorway.

I’ll never forget the day I knew I needed to change the sheets on my bed. It seems innocent enough, but I had been warned that this step is not so simple. The issue at the core is that Kim was on those very sheets. That was our bed where we spent so much of our lives.

On the appointed day I climbed my stairs to do the deed. I began to cry. I pulled the comforter and blankets back. I began to wail as I physically engaged in the act of pulling the sheets off the mattress and pillowcases from the pillows. It became a physically laborious chore. Finally, they were all in a pile on my bedroom floor, and I picked them up. Still wailing, I methodically stumbled down the stairs and into the laundry room. I placed the sheets in the washing machine, added soap, closed the lid, and started the cycle. Each step was exhausting.

Then there was instant release. And this is where the imagery of doorways first came into focus. It was as if a huge door had been raised in front of me. I literally had a choice. I could avoid, delay, or face washing my sheets. Again, it was as if a heavy daunting door stood before me.

I chose to push it open and face the task. As I thought through the experience and compared it to other decisions I had made in the early weeks, I began to picture decisions as doorways. I thought about my choices to face these difficult moments or to sidestep them. Doorways rise up before every person who grieves. Those doors of mourning must be faced, opened, and entered.

“He gives power to the faint, and to him who has no might he increases strength.” Isaiah 40:29 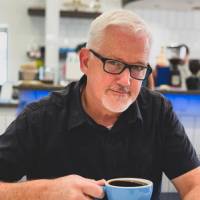